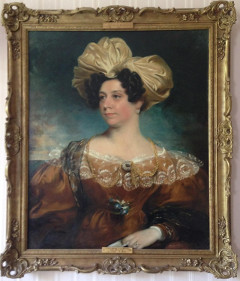 In 1822, the Paris-based English language publisher A. and W. Galignani brought out in two volumes octavo the Journal of a Tour in France, Switzerland, and Italy, during the Years 1819, 20, and 21 [see BTW1040] by Marianne Colston. A further folio volume comprising 50 lithographs by François Le Villain (fl. 1820-1830) after drawings by Colston accompanied it. The following year, 1823, the two volumes and the pictorial atlas were again published in London by G. and W. B. Whittaker. The firm of Galignani was notorious for bringing out cheap pirated editions of popular classics first published in London, so the reversal here is unusual. How Colston’s first and only work got its start in Paris is thus only one of many mysteries surrounding her life.

We do know that Marianne Jenkins Colston was born at Bath in 1792, the only daughter and heir of William Jenkins (c. 1751-1837), of Shepton Mallet, Somerset, and his wife, Sarah Jenkins, née Watkin. The tour commemorated by the volumes began on 2 November 1819, the day after Marianne had married Edward Francis Colston (1795-1847), descendent and heir of the wealthy Bristol merchant and benefactor, Edward Colston (1636-1721; ODNB). While Marianne describes leaving her ‘beloved parents’ behind as she ventured forth on her honeymoon tour, the book she eventually produced from the travel memorandums she wrote along the way embodied the affections that bound together her old and new family.

One sign of this is her dedication of the book to ‘Miss Eliza Jenkins of Stone, Glocestershire [sic]’, in a cursive type face that suggests in its form the intimacy it expresses. Eliza was probably an aunt or cousin and could well be the Mrs Elizabeth Symes, wife of the Reverend Richard Symes, who appears in William Jenkins’s will. While Marianne refers intriguingly to Eliza as ‘a name so honoured for science and literature’, nothing further is at present known about her.

Marianne’s mother, too, appears to have been drawn to literature and the arts, and Marianne interpolates within Journal of a Tour several of her mother’s sonnets and some verses, all signed ‘S.J.’. These include sonnets on Italian themes (with Byronic echoes), a translation from Petrarch, and a poem entitled ‘Imitation from a canzone of Vincenzio Monti. Addressed to little Arabella’. Sarah Jenkins chose Monti (1754-1828) as a model both for his reputation as a versifier as well as his embrace of Italian independence from Austria, a cause Sarah defends in a note to her ‘Italy – A Sonnet’ (1:106n4). But ‘Imitation’ is also a moving and affectionate tribute to both her granddaughter and daughter, ending (1:352):

The infant Arabella Sarah (1820-91), named after both paternal and maternal grandmothers, was born during her parents’ sojourn in Italy and Switzerland and, as her mother wrote, ‘is, probably, the first English child who has been baptized on the summits of the Simplon’ [1:351]).

Both Marianne and her mother also shared an interest in drawing. In the Library Company of Philadelphia, a copy of Joseph Priestley’s A Familiar Introduction to the Theory and Practice of Perspective, 2nd edn (London 1780) bears a title page inscribed with two names, ‘Sarah Jenkins’ and ‘Marianne Colston’, being very likely a book given or bequeathed from mother to daughter. Priestley’s preface specifically notes travellers' need for manuals such as his:

Of those gentlemen who travel, or go long voyages, how few are furnished with the rudiments of this art, for the exercise of which they have perpetual occasion, if they would preserve the ideas of the memorable scenes and object they meet with, or communicate any just notion of them to their friends.

It is tempting to think that Priestley’s book helped Marianne in her own artistic training, inadvertently shifting the object of his lessons to include female as well as male travellers, but we know little about her education. Her appreciation of the ‘laws of perspective’ (1:191) in painting and architecture are, however, everywhere apparent in A Journal of a Tour, not least in Colston’s own sketches. 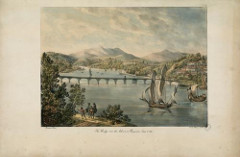 After the journey was completed, Marianne prepared her manuscript for the press around if not during the time in which she was pregnant with her first son Edward Colston (1822-1864). Thereafter her family increased with the birth of William Jenkins Craig Colston (1824-1867) and Samuel Hunt Colston (1825-1854). The Colstons probably resided at Filkin’s Hall, Oxfordshire, until 1840, when they purchased Roundway House, Wiltshire, where Marianne continued to reside after her husband’s death in 1847 (the North Wiltshire census of 1861 describes her as a ‘landed proprietor’ and head of a household that included at that time two of her sons and a daughter-in-law, two granddaughters and a grandson, three visitors, and fourteen servants). She died 3 October 1865, aged 73.